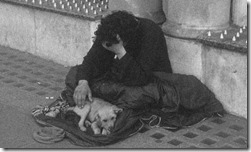 People have long known the story of Francis of Assisi. He turned from a life of luxury to one of voluntary poverty with the intention of sharing his possessions with the poor. Francis became an example to his fellow townspeople of the biblical assurance that God does provide.

Francis attracted others to his way of life and began the Order of Mendicant Friars. A sister order was established by Clare, to whom Francis was both friend and mentor. In the hymn of praise attributed to Francis, God is exalted for creating all of the elements of the world of which, according to Francis, humans are only one part. Francis placed people in the perspective of God’s whole creation and asserted a kinship among all the elements. The example of his impoverished life drew others to him and increased the numbers of the Franciscan Order. He began the first of the Monastic groups to develop a spiritual life that included a life lived as much in the world as it was a life of contemplative solitude.

Filed under Francis of Assisi, Monasticism