It was said of him that he had a hollow in his chest channeled out by the tears which fell from his eyes all his life while he sat at his manual work. When Abba Poemen learned that he was dead, he said weeping, ‘Truly you are blessed, Abba Arsenius, for you wept for yourself in this world! He who does not weep for himself here below will weep eternally hereafter; so it is impossible not to weep, either voluntarily or when compelled through suffering.’

—- Sayings of the Desert 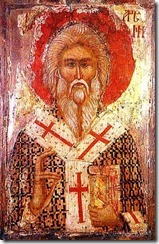 How many of us really take sin seriously enough to weep for ourselves. In a world of much rationalization and warped reasoning, it is woefully easy to excuse ourselves from blame for anything. In the early ‘70s, psychiatrist Karl Menninger wrote a book entitled Whatever Became of Sin? Years after Dr. Menninger’s death, his question still remains. Our culture has scraped the idea of sin as glibly as we dispose of our obsolete cell phones and computers. People who attend our churches don’t want to hear anything on Sunday that would upset them or cause just the slightest feeling of discomfort. When the words of the pastor or scripture itself cause introspection, it is time to flee. After all, I come to church to make myself feel better.

Abba Arsenius gives us an entirely different model for this matter. His feeling of sin was so deep that he spent untold hours weeping on his own behalf. Arsenius understood the gravity of the human condition and the gratefulness we should express because of God’s grace. No presumption was made that God loves us so much that we are forgiven even if do not repent. He wept for his own sins, and I believe the world would be a far better place if we did the same.

One response to “Weeping for Ourselves”