Hospitality and the Church

From the rule of St. Benedict, Sixth Century A.D. “If any pilgrim monk come 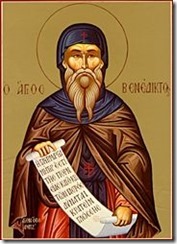 from distant parts, with wish as a guest to dwell in the monastery, and will be content with the customs which he finds in the place, and do not perchance by his lavishness disturb the monastery, but is simply content with what he finds, he shall be received, for as long a time as he desires. If, indeed, he find fault with anything, or expose it, reasonably, and with the humility of charity, the Abbot shall discuss it prudently, lest perchance God has sent him for this very thing. But if he have been found gossipy and contumacious in the time of his sojourn as guest, not only ought he not to be joined to the body of the monastery, but also it shall be said to him, honestly, that he must depart. If he does not go, let two stout monks, in the name of God, explain the matter to him.

True hospitality to the pilgrim is difficult enough, but dealing with someone that disrupts the community is even harder. The solution proposed by Benedict is quite radical by our standards. Perhaps the 21st century could learn from him. Who knows?

3 responses to “Hospitality and the Church”