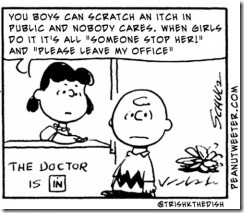 In a Peanuts cartoon Lucy is playing her role as psychiatrist. She sits in her booth with the sign that reads: “Psychiatric Help – 5 cents.” The sign below says, “The Doctor Is In.” Lucy says to Charlie Brown, “Your life is like a house.”

In the next frame, she says reflectively, “You want your house to have a solid foundation, don’t you?” Charlie Brown has a kind of blank look on his face. Lucy says, “Of course you do.”

Charlie Brown is still silent – saying nothing. Then in the fourth frame, psychiatrist Lucy says, “So don’t build your house on the sand, Charlie Brown.” About that time, a huge wind comes up and blows the booth down. Lucy, sitting in the rubble says, “Or use cheap nails.”

One response to “Cheap Advice”