A Cloud of Forgetting

If you want to enter, live, and work in this cloud of unknowing, you will need a cloud of forgetting between you and the things of this earth. 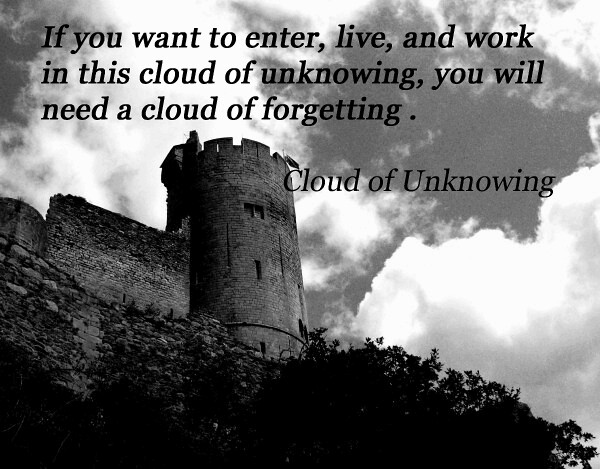 Consider the problem carefully and you will understand that you are farthest from God when you do not ignore for a moment the creatures and circumstances of the physical world. Attempt to blank out everything but God.

WAYS TO ENTER “A CLOUD OF FORGETTING”

Ancient Rome Christians were reminded, “…all have sinned and fall short of the glory of God.” Our real dilemma is to try to unpack the meaning of that short phrase and apply it in a way that builds our faith and our witness. We are born as proud and resourceful beings. God meant for us to be able to thrive in this world but He also meant for us to be dependent on Him. As we become increasing independent, we moved far away from Him. The mystical writer challenges us to get as far away from the things of this earth as we can so we can get closer to God. We must somehow “forget” who we are, what we have accomplished, and get in a place where we can encounter God. At the same time, never forget that we are part of this world.

To do this we must be fully aware of our surroundings and begin the task of stepping away for a short time just a pause. When we step away, we are then

given the opportunity of communicating with God as a deeply personal friend. As long as our lives are crowded by the things of this world, we will never see God in a light that glorifies us and Him. Seeing where we are allows us to set our course to where we want to be and allows us to seek guidance along the way. The hymn writer proclaims, “Turn your eyes upon Jesus, Look full in His wonderful face; and the things of earth will grow strangely dim In the light of His glory and grace.” That is the direction of a contemplative.

No matter how hard we try, we still live in this world -we cannot escape it. We cannot ignore it and for the most part, we cannot change it. With regard to this dilemma, different people take different actions. Hermits try to escape, hedonists embrace it, and most of us just try to find balance in our lives. The call of the mystic writer is to “blank out” everything but God. We do this by recognizing the problems and cares around us and putting them in the background of our lives as we seek to be nearer to God. We don’t get closer to God by being in denial of the carnal nature that we all possess. Closeness to God comes as we recognize our situation and say to God, we seek you with all our strength.

Lord may I approach you with full knowledge of the baggage I carry. This knowledge that instills in me a total dependence on your grace and a trust in your promises. With such a heart I come to you today seeking knowledge only you can grant. Please allow me your presence in my life in spite of my sins. I invite you to fill my heart in this time of my need.

Filed under Cloud of Unknowing

The Divine – Human Portrait of Grace

And the Word became flesh and lived among us, and we have seen his glory, the glory as of a father’s only son, full of grace and truth. (John testified to him and cried out, ‘This was he of whom I said, “He who comes after me ranks ahead of me because he was before me.” ’) From his fullness we have all received, grace upon grace. The law indeed was given through Moses; grace and truth came through Jesus Christ.

I have my son’s dog tags which he wore for his deployment to Iraq. I treasure them and look at them often to contemplate the lessons I learned that year – an awareness of the real presence of God, gratefulness for every day of life, realization that imprinted in just four lines of metal is all the Army needs to know about a soldier. This is how my son’s dog tag reads:

There is no rank, no hometown, no race, no family – just a blood type which ties him to the physical world and a religious affiliation which ties him to the spiritual world. At the end of the day that is who we are – human beings with a blood type imprinted on our DNA and spiritual beings with a religious confession of faith in Christ imprinted on our souls.

Jesus Christ’s passion and death reaches us with lessons of grace, because he was both a human being and God, a human – divine miracle, and the source of grace we so desperately need.

The angel declared his name, “God with Us”

Over and over “God With Us” demonstrated how to give grace – underserved gifts of love and mercy to the unworthy, unloving, and ungrateful. The crucifixion of Christ provides for us an image of the essence of our existence – finite human beings and infinite souls that are united by the resurrection of God With Us, the divine and human in a portrait of grace.

PRAYER: Father, Thank you for grace shown to us in the death and resurrection of Christ.