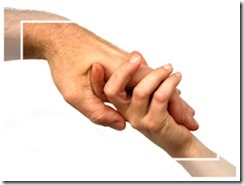 We need to be able to look into a mirror and not only see, but fully believe, that the reflection we view is a child of God. We need to believe in ourselves and we can with the assistance of another. A good example of such transformation is found in the story of Dulcinea, one of the principal characters in the popular Broadway musical, Man of la Mancha. The audience learns that Don Quixote, the chief protagonist, lives with many illusions, most especially his idea that he is a knight errant who battles dragons in the form of windmills. At the end of the play as he lays dying, Don Quixote has at his side a prostitute, Aldonza, whom he has called throughout the play Dulcinea – Sweet One – much to the laughter of the local townsfolk. But Don Quixote has loved her in a way unlike she has ever experienced.

When Quixote breathes his last Aldonza begins to sing “The Impossible Dream.” As the echo of the song dies away, someone shouts to her, “Aldonza!” But she pulls away proudly and responds, “My name is Dulcinea.” The crazy’s knight’s love had transformed her.

So if anyone is in Christ, there is a new creation: everything old has passed away; see, everything has become new!

Filed under Love of God, Salvation