In his book Loving God, Charles Colson draws attention to an incident involving an Indiana judge named William Bontrager. Bontrager had to pass sentence on Fred Palmer, a decorated Vietnam veteran, who was found guilty of burglary. The crime was caused partly by involvement with drugs and alcohol. Indiana law required a sentence of ten to twenty years for Palmer’s offense.

However, new regulations designating a lesser penalty had gone into effect eighteen days after Palmer’s arrest. To complicate matters, Palmer had become a Christian in jail and seemed to have changed. Should the judge sentence Palmer, a man who had never been in jail, to ten years or more? Or should he declare the older statute in violation of Indiana’s constitution and give him a lighter sentence? Bontrager did the latter. Fred Palmer was out of jail in seven months, had a job, and was paying back his former victims.

The events that followed received national attention. The Indiana Supreme Court reversed the judge’s decision and ordered Fred Palmer sent back to prison. The judge’s attempts to fight the court’s decision during the next two years led to his own indictment for criminal contempt of court and, ultimately, his forced resignation. Fred Palmer was sent back to prison, but was released twenty months later by the governor. The judge’s convictions cost him his job, but not his integrity.

The writer of Proverbs says,”It is better to be poor and godly than rich and dishonest.” (Proverbs 16:17) That lesson is hard for our society. We seek to be “rich” at great cost to ourselves and our families. Our upwardly mobile society puts a high price on success. We sacrifice a great deal to be successful. If we sacrifice our integrity, then our wealth is worthless. Without integrity we cease to be fully human and the image of God fades within us. What we could have been becomes a sad memory.

God want us to be rich in mercy, abounding in grace just as he is to us. Without integrity this is impossible. We must stand for what we know is right even when it has a cost. Integrity gives us the fortitude to stand when others fall, to walk when others run and to truly know who we were created to be.

Let us live this life not being corrupted by our surroundings but strengthened by the integrity that comes from being followers of Jesus.

Integrity is doing the right thing, even when no one is watching.

The greatness of a man is not in how much wealth he acquires, but in his integrity and his ability to affect those around him positively.

We learned about honesty and integrity – that the truth matters… that you don’t take shortcuts or play by your own set of rules… and success doesn’t count unless you earn it fair and square.

The strength of a nation derives from the integrity of the home.

Subtlety may deceive you; integrity never will.

When you make a commitment to yourself, do so with the clear understanding that you’re pledging your integrity.

The qualities of a great man are “vision, integrity, courage, understanding, the power of articulation, and profundity of character.

When you are able to maintain your own highest standards of integrity – regardless of what others may do – you are destined for greatness.

It is true that integrity alone won’t make you a leader, but without integrity you will never be one.

The integrity of men is to be measured by their conduct, not by their professions.

Human beings exist that have integrity, that know how to keep their mouth shut, that know the bigger picture, that don’t sell out their friends.

Openness, respect, integrity – these are principles that need to underpin pretty much every other decision that you make. 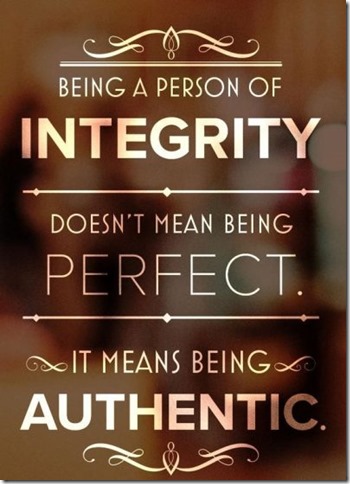 First for the Lord grants wisdom! From his mouth comes knowledge and understanding. He grants a treasure of good sense to the Godly. He is their shield, protecting those who walk with integrity. He guards the paths of justice and protects those who are faithful to them.

Follow the steps of good men instead, and stay on the paths of the righteous. For only the upright will live in the land, and those who have integrity will remain in it.

Do not envy violent people; don’t copy their ways. Such wicked people are an abomination to the Lord, that he offers his friendship to the Godly. The curse of the Lord is on the house of the wicked, but his blessing is on the home of the upright.

The way of the righteous is like the first gleam of dawn, which shines ever brighter until the full light of day.

We all have happy memories of the godly, but the name of a wicked person rots away.

Those who are godly hate lies; the wicked come to shame and disgrace

The life of the godly is full of light and joy, but the sinner’s light is snuffed out.

LORD, fill me with the wisdom and strength to live a life of honesty and integrity. I seek to a live a life that is full of freedom from the corruption of the world. Guide me by your spirit to use your strength to achieve this life, because when I achieve it a great weight will be lifted from me.