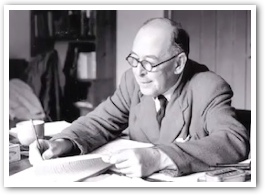 In The Problem of Pain, published in 1940, Lewis offered the reader this overly humble confession: “You would like to know how I behave when I am experiencing pain, not writing books about it.  You need not guess for I will tell you; I am a great coward.”  In a letter to his brother Warnie, written while working on the book, he claimed: “If you are writing a book about pain and then you get some actual pain […] it does not either, as the cynic would expect, blow the doctrine to bits, nor, as a Christian would hope, turn into practice, but remains quite unconnected and irrelevant, just as any other bit of actual life does when you are reading or writing.” Neither the confession nor the claim stood the test of time.  In 1961, Lewis wrote about pain again, this time about his own.  In A Grief Observed he inadvertently satisfied the alleged curiosity of his readers.  But he did not come across as a coward; nor did his firm grasp of “a theory of suffering” prove altogether irrelevant.  True, his faith in God was challenged; he uttered blasphemies; he doubted God’s existence; worst of all, he went through the very objections to God’s goodness which he had refuted in The Problem of Pain: they all seemed valid to a disabled mind, under the sway of unbearable pain.  But then, reason returned: “Why do I make room in my mind for such filth and nonsense? Do I hope that if feeling disguises itself as thought I shall feel less?”

When feeling disguises itself as thought, all nonsense is possible.  Nowhere is it truer than in the problem of pain.  Yet, from the Christian perspective, anything that can reasonably be said about suffering is only a preamble to the Mystery of the Cross.  Lewis’s solution to “the problem of pain” prepares the intellect for a dive into the Mystery.